An independent discovery of Costas arrays

In today’s post, I will discuss a little-known combinatorics paper by E.N. Gilbert from 1965, in which he independently discovered the “logarithmic Welch” construction of Costas arrays.  Costas arrays are named after the late IEEE fellow John Costas, whose seminal paper on what are now called Costas arrays appeared, coincidentially, in 1965, the same year as Gilbert’s paper.  I had never heard of Costas arrays until just a few weeks ago, when I needed a combinatorial object with their properties for a problem I am trying to solve about error-prevention in molecular self-assembly.  So I approached the literature in a nonstandard way, found Gilbert’s paper, and eventually wrote experts on Costas arrays to confirm that Theorem 6 of Gilbert’s Latin Squares Which Contain No Repeated Digrams did indeed produce a construction that independently appeared in the literature “for the first time” in 1982.  Therefore, my objective with this blog post is twofold: (1) to make better known an area of combinatorics that may be familiar to information theorists but not to computer scientists; and (2) to change in a small way the intellectual history of this area, so Gilbert is recognized as a co-inventor of an important class of combinatorial designs.  (ADDED LATER: It appears I may have accomplished (2).  The Wikipedia page on Gilbert now states that he was a co-inventor of Costas arrays, and cites this blog entry as justification.  This is my first Wikipedia citation, to my knowledge.  Somewhere along the way, I seem to have morphed from off-the-wall commentator to reliable source.)

First, though, a quick pointer for anyone interested in DNA computation: Dave Doty just contributed an entry to the CSTheory Community Blog on the DNA Computing conference that took place last month at CalTech.  Dave was on the local arrangements committee, and, in his post, he talks about both technical results presented at the conference, and suggestions for organization of future CS conferences.  Good stuff.

Latin squares and the design of experiments

A Latin square, of course, is an

square with entries from an alphabet

, such that each letter of

.  Latin squares find applications in group theory, error-correcting codes, and the design of experiments.  However, as Gilbert points out in his paper, Square 1 is not a good Latin square on which to base experiments, because pairs of letters (i.e., digrams) repeat in multiple rows and columns of the square (examples: AB, BC).  Quoting from the paper:

The [elements of the Latin square] represent stimuli to be presented once each to a subject in a time sequence…. Each row or column of a Latin square can supply a suitable order of presentation.  However, if the experiment is to be repeated several times using different rows of a Latin square, the square should have rows which resemble each other as little as possible…. If a stimulus can influence a subject’s response to the next stimulus then no two orders of presentation should repeat the same pair of stimuli consecutively.

Therefore, we would like to be able to construct a Latin square such that any adjacent pair of letters appears at most once horizontally, and at most once vertically.  Gilbert solves this problem by constructing an addition square from two permutations with distinct differences.

has the property that

has the property that

is a PDD, while

elements, it is possible to construct an

Latin square by placing the element

.  A Latin square produced in this way is called an addition square. Suppose a digram

appears twice in an

.  Then the following two congruences must hold.

Taken together, those congruences imply

which is impossible if

is a permutation with distinct differences.  By a similar argument, if

is a permutation with distinct differences, a vertical digram cannot repeat in the addition square either.

It is not hard to produce a PDD on an even number of elements.  Suppose

.  Then the following permutation is a PDD: 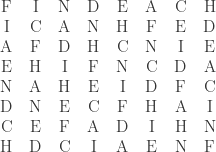 Square 2 contains no repeated digrams, either horizontally or vertically.  However, it contains horizontal and vertical repeats of a different form:

is a “don’t-care” symbol that repeats

repeats in the rows of Square 2.  In order to eliminate this type of repetition, Gilbert constructs addition squares using a new tool: Costas arrays.

A Costas array is a special kind of PDD, one in which every difference between every pair of elements

apart is distinct, for each

.  (A PDD only requires this of elements that are spaced 1 apart.)  Scott Rickard maintains the website costasarrays.org, to centralize information on research into Costas arrays.  I will quote from the historical overview on that site.

In the 1960’s, Dr. John P. Costas, motivated by a novel SONAR application, began searching for permutation matrices with ideal auto-ambiguity properties. By hand, he found examples of such matrices of size up to N = 12. Unable to find one of size 13, he contacted Professor Solomon Golomb who then provided generation techniques based on the theory of finite fields for creating these matrices, dubbed Costas arrays. The generation methods produce Costas arrays for infinitely many N, but not all N. For example, the techniques can be used to generate arrays for all N ≤ 31, but no Costas array of size N = 32 or N = 33 has been found. Computer search has enumerated all Costas arrays of size N ≤ 29, but the exponential growth of the search space prohibits extending these results much further with current computational capabilities. After nearly 40 years of research, the first question concerning Costas arrays remains open: Do Costas arrays exist for all N?

A discussion starting from that quote could proceed in many different directions, but I want to bring this blog entry to a close, so I will limit myself to a sketch of Gilbert’s Theorem 6, in which he independently discovers a method of generating Costas arrays, and then he applies them to the creation of addition squares.

be a primitive root of the prime

and define a permutation

is a Costas array.

Of course, Gilbert did not call

a Costas array.  He called it a permutation with distinct differences

.  This theorem turns out to be essentially identical to a theorem proved in 1982 by Welch and Golomb that describes the “logarithmic Welch” construction of Costas arrays.  (Welch came up with the method as a heuristic to produce Costas arrays, and Golomb proved rigorously that it worked.)

, and using the primitive roots 3 and 5 of GF(7), Gilbert produces Square 3, an addition square from those two Costas arrays:

Square 3 has the property that no digrams repeat in any row or column, where a digram is now defined as the same two letters separated by the same number of spaces.

Scott Rickard and Konstantinos Drakakis, both experts on Costas arrays, verified for me that I wasn’t just seeing things, and in fact, Gilbert’s construction was an overlooked independent discovery.  Before I knew the name “Costas array,” several people on CSTheory and MathOverflow put up with confused questions I asked (CST question, another CST question, MO question).  I also had a helpful email correspondence with Sergey Kitaev.  When all was said and done, though, I thought one day to type “no repeating digrams” into Google, instead of “no repeating pairs.”  That brought me to Gilbert’s paper, and searching on the phrase “permutations with distinct differences” brought me to the magic term “Costas arrays.”  Hopefully some applications of this proof technology to self-assembly will be appearing soon at a conference near you.

5 responses to “An independent discovery of Costas arrays”